Next in our line of memory reviews is a kit I have actually had at my work desk for a while.  In the land of overclockers, synthetics are everything – if it can get a higher number on a screen, and that number can be pushed, then it is worth it.  Thus in steps comes G.Skill with their high end TridentX range, pushing the boat from DDR3-2400 (both 4GB and 8GB modules) all the way up to DDR3-2800 (4GB modules only).  The kit we are testing today falls right in the middle of all of this, being a 2x4 GB kit of DDR3-2666 11-13-13.  This is an 8 GB kit that retails at $170, and for that money we could easily pick up a 2x8 GB 2400 C10 kit.  Proof will be in the pudding as we put this kit through the testing suite – let us see if it is actually relevant for day-to-day use.

Back in our initial memory overview, I gave a couple of formula in order to calculate (at a high level) how a memory kit should act in sequential and random reads.  The formulas were:

Applying this to the G.Skill kit we have in today gives us 8.25ns for a one word read, and 10.88ns for reading eight words.  For comparison, the following memory speeds offer similar scores:

Most of these kits should be available for sale around the same price, but purely by these numbers the 2666 C11 has an advantage over both the 2400 C10 and the 2800 C12.  Moving up to 2666 C10 obviously has the advantages of the lower command rate.

With the G.Skill 2666 C11 kit we are testing today, as it is the highest rated kit we have tested, it clearly gets top marks across almost all of our benchmarks.  Obviously there are some benchmarks that enjoy the MHz (Batman:AA, WinRAR), but others either tend towards a limit (Portal 2 on IGP) due to other factors becoming limiting, or some would prefer more memory as a whole (Thunderbolt copying, more on that later), or others need a nicer balance between MHz and Command Rate (catia in SPECviewperf).

The kit is also great at overclocking.  Like I said, I have had this kit for a while, and part of playing around with the kit was an attempt to push the MHz as far as it would go.  In that respect the kit easily pushed 2800 C11 at stock volts, and 2950 C12 with a bit more juice.  Given that plenty of kits on the market will not move an inch above XMP at stock volts, this is nice to see.

The downsides to this kit are predominantly two-fold.  The cost per GB is astronomical, especially compared to the other kits we have tested.  In our memory overview, the 1866 C9 4x4GB kit performed at almost the same level as this 2666 C11 2x4GB kit for double the capacity and $75 less.  That is a shocking statement – the only way to show that the 2666 C11 kit is a mountain and a half better than the 1866 C9 kit is through synthetics, which rarely have a real-world influence, especially in memory.

As a result, this kit is purely for the extreme overclockers out there – those that need and can feel the difference between 2666 C11 and 2400 C11 by virtue of the number they get on a screen.  It will be some time before a kit of this high specifications comes down to a reasonable price (sub $100) for the rest of the userbase to be interested. 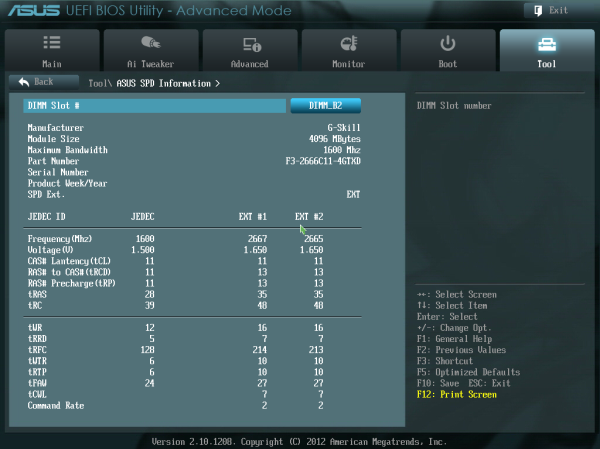 The big change over previous kits is the tRFC, the Row Refresh Cycle time.  tRFC is defined as the minimum wait in cycles required following a refresh to an idle bank before it can be again activated for access.  This should mean that reads from subsequent rows requiring a refresh will be faster compared to the 2400 C10/C11 kits we have tested.

This TridentX kit is essentially the same as the previous TridentX 2400 C10 kit we reviewed - TridentX is one notch above RipjawsZ, and spans kits from DDR3-2400 C9 to DDR3-2800 C11.  The main features on the kit (aside from the speeds) are the heatsinks, to which G.Skill have added a detachable fin.  Without the fin, the module is approximately 9mm above the module, and with the fin the total height is 22mm above the PCB.  That is a lot of height for a memory module that in 99% of circumstances would not produce enough temperature to trouble any build. 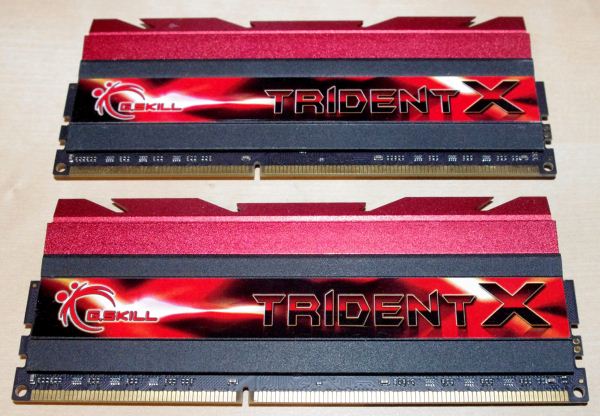 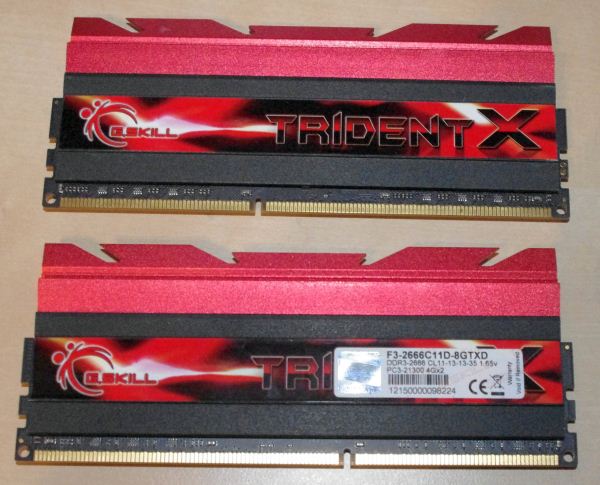 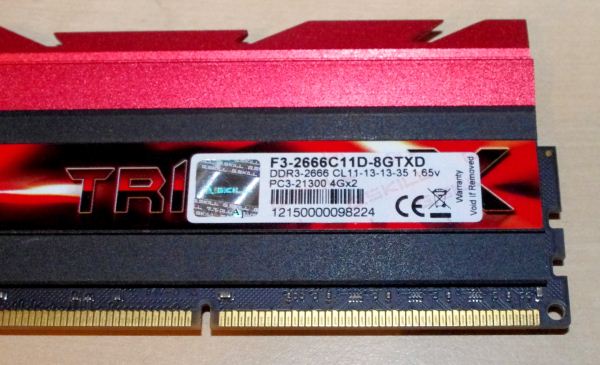 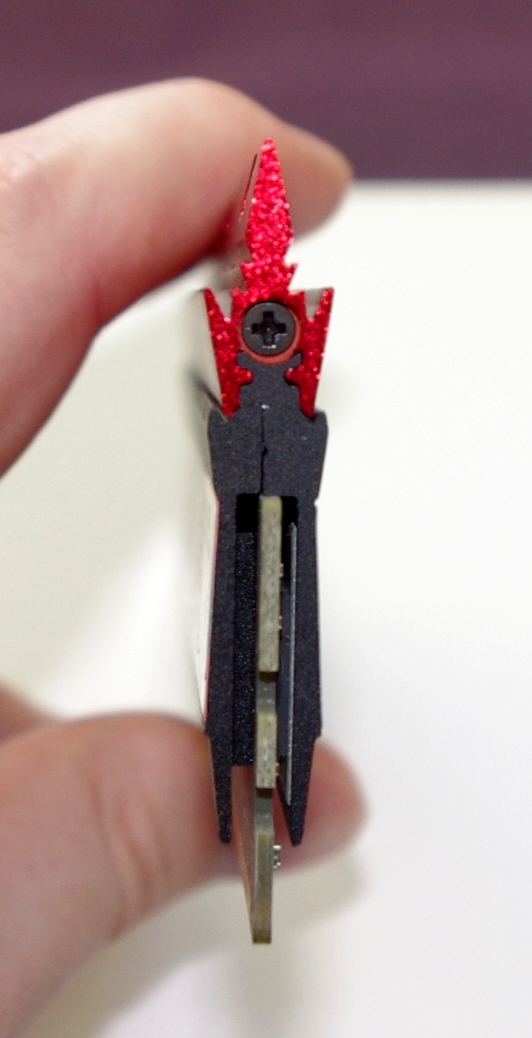 In order to remove the fin there is a screw at each end of the module, and the fin slides off effortlessly.  The fins fit very well, but upon attempting to reattach a fin I was unable to get it on as securely as it came out of the box, leaving a little wobble in the fin.  There is no cause for alarm if you get a module with a wobbly fin – nothing is wrong, and it will not affect the heat dissipation as much as most users may think.  Most modules output a few watts at best, so dissipation of several watts of energy without a fin is simple enough.

One thing I should point out with the TridentX modules is the fins are actually very sharp – if you are trying to put these modules into a motherboard where the range of movement to apply pressure is small, wear some gloves.  I actually did take some skin off my hand doing exactly this, trying to use my fingers and palm to push the modules down.

As with the previous TridentX 2400C10 kit, putting such a large module in our TRUE Copper scenario was a recipe for disaster: 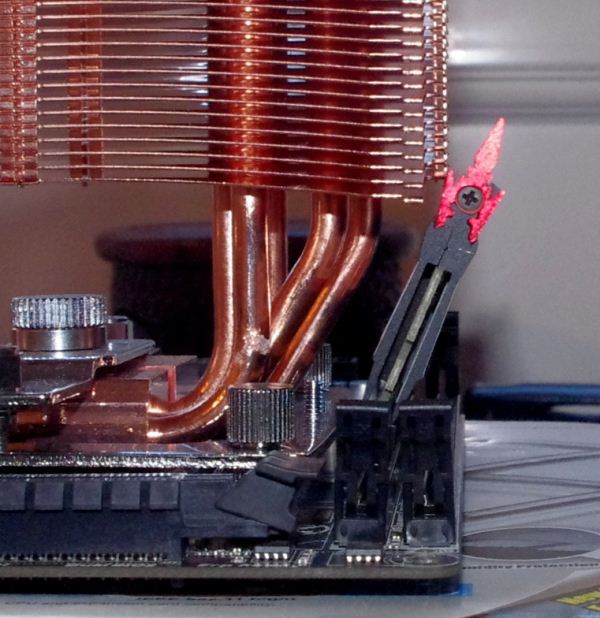 Even putting the module in the second slot faired no better: 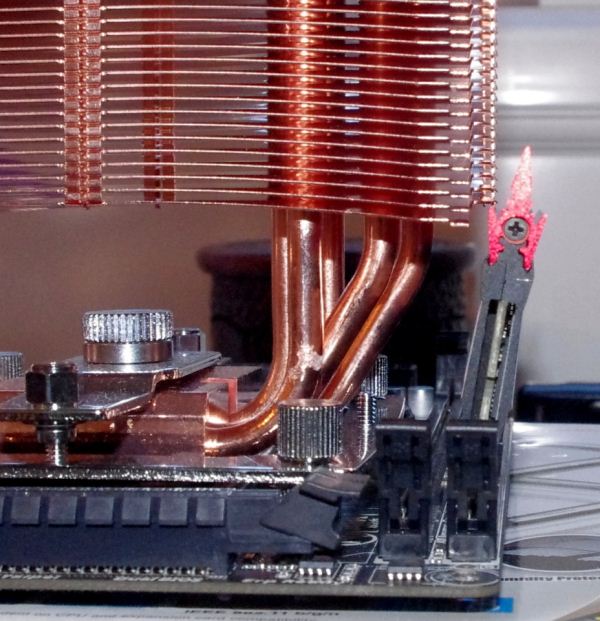 All the testing for this review was done on an ASUS P8Z77-V Premium motherboard with the Intel stock cooler, so module movement is not much an issue in that case, but big air coolers still get a lot of usage (and is more often than not an investment over several updates), so there are things to consider when purchasing memory.