A few months ago, Intel brought TRIM support to RAID-0 SSD arrays but limited it to its latest 7-series chipsets. As 7 and 6-series chipsets are very similar, there was no good explanation to why Intel didn't include support for 6-series chipsets other than forced feature differentiation and/or not wanting to go through a lengthy validation process on an older platform. We have covered the reasons why you should want TRIM in the past but the main benefits are obvious: more consistent performance and higher endurance. Limiting the support to only 7-series chipsets was a huge letdown.

Fortunately the Internet is full of extremely knowledgeable and ethusiastic people with the drive to look for unofficial solutions. AnandTech forum members Dufus and Fernando 1 have been able to modify the RAID OROM so that TRIM and RAID-0 SSD arrays now work with at least Z68 and P67 chipsets, both of which are unsupported by the official OROM. While the forum thread is already full of posts showing that the modification works, I wanted to try it myself and to see how smooth the process was.

My test platform is the ASRock Z68 Pro3. First I set the SATA mode to RAID and installed Windows 7 (64-bit) to a spare SSD I had. I didn't install any updates or drivers other than Intel RST 11.6 drivers to enable RAID-0 TRIM support from the driver perspective. For the RAID-0 array, I used a 120GB Corsair Neutron and a 120GB Corsair Neutron GTX. I picked those because they are the two most similar SSDs I have and their performance gets fairly bad when tortured with random writes, making them ideal for this test. Before creating the RAID-0 array, I secure erased both drives so we could get accurate baseline performance: 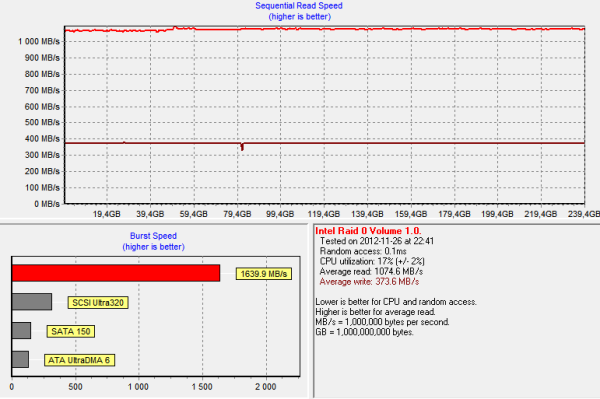 I then tortured the whole RAID-0 array for 20 minutes with compressible 4KB random writes at a queue depth of 32. This is what the performance looks like without working TRIM: 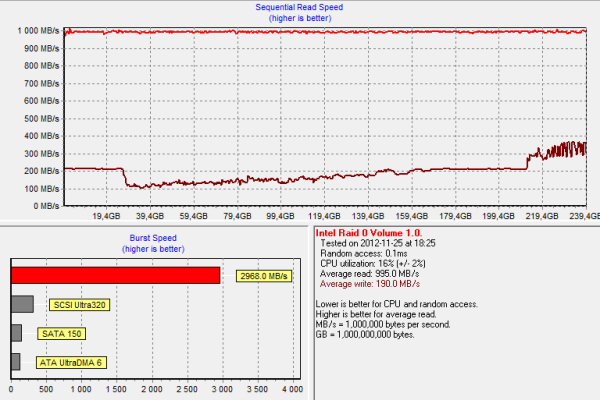 Performance isn't terrible but it would be a lot worse had I tortured the array for longer. In this case, 20 minutes is enough to show that performance degrades and we need functioning TRIM to get it back to where it was. 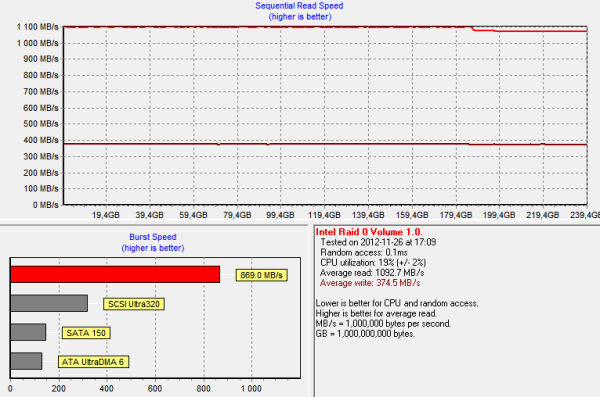 Hooray, it works! If you're running RAID-0 SSDs on Z68 or P67 based motherboard, you can finally get TRIM support as well.

The modification proves that there are no hardware limitations that keep the Z68/P67 platform from supporting TRIM on RAID-0 arrays, which is what we originally thought as well. It's a bit disappointing to see Intel limiting such a useful feature to only specific motherboards, especially since many users are running pre-7-series motherboards.

It's of course possible that 6-series support has been in the plans since day one but Intel prioritized 7-series motherboards and didn't have time to validate 6-series motherboards, which is why the support is currently limited to 7-series chipsets. It's more likely that the added cost/time required to validate both 6 and 7 series chipsets was deemed not worth it, given that Intel is expecting power users to transition to newer platforms fairly aggressively. We've seen similar behavior from Intel in the past. Remember that the original X25-M never got TRIM support while the G2 did, even though the two shared a common controller architecture. It's all about keeping margins high unfortunately.