We were at Broadcom's press event in San Francisco on Tuesday, where they outlined their vision for the trends in the next few years. Covered aspects included location technologies, Wi-Fi display, 5G Wi-Fi, NFC, connected automotive technologies and enterprise BYOD (Bring Your Own Device) issues. Rather than just presenting details from the press releases, we dug a little bit into what Broadcom thought about related competing and complementary technologies. In this piece, we will be taking a look at Broadcom's thoughts on the technology trends and our analysis of the same.

Broadcom was bullish on location technologies which can enable creation of contextually aware platforms. These enable ad-targeting (for example, available sale or discount offers near the user's current location), automatic traffic advisory notes and other similar applications. 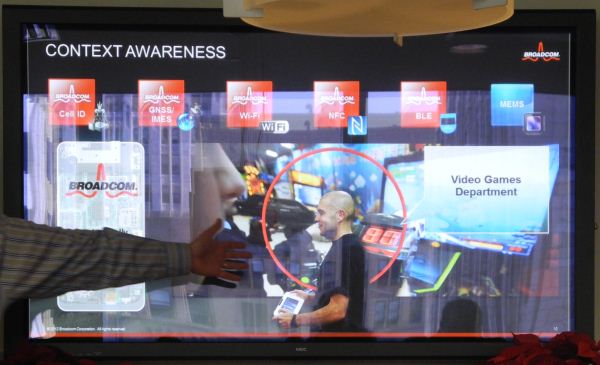 Broadcom indicated that they are well positioned to provide location technologies at various levels of 'accuracy' including cellular station identification, GPS, Wi-Fi, NFC, BLE (Bluetooth Low Energy) and MEMS. MEMS might appear to be out-of-place in the list, but it supplies essential information related to directionality / orientation.

These technologies make it necessary to have multiple antennae in the device. Wi-Fi operates in 2.4 GHz and 5 GHz, BLE in 2.4 GHz and NFC in 13.5 MHz. Cellphone reception and GPS signals require completely different frequencies too. Designing a system with a smartphone form factor and antennae for so many different applications is also a challenge in addition to the silicon requirements.

Intel's Wi-Di was one of the earliest commercially well-adopted wireless display technology which involved encoding the frame buffer contents and transmitting it over a ad-hoc Wi-Fi connection. While the initial versions utilized MPEG-2 encoding, the rise of Full HD requirements signalled the move to H.264. Currently, all wireless display technologies using the above method utilize H.264 encoding. While Wi-Di was an Intel-only initiative for notebooks, the Wi-Fi alliance took a keen interest in this segment of the market and created the industry-wide Wi-Fi Certified Miracast standard. 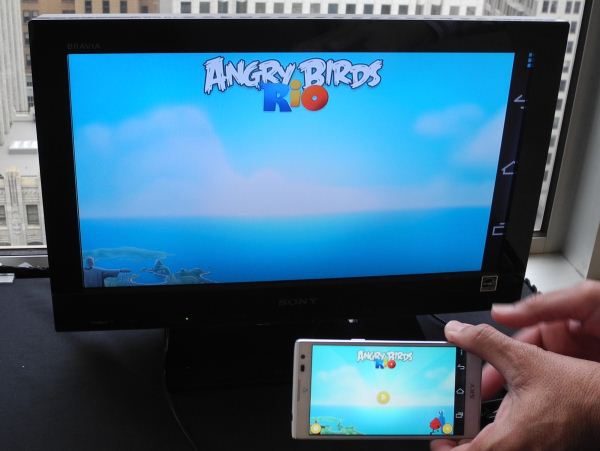 Broadcom showed a demo with the wireless display working on a Korean Sky-branded smartphone and a Broadcom based USB-powered Wi-Fi Display receiver on the sink side. Interestingly, even though the Nexus 4 supports W-Fi Display (and it was used for the NFC demos), it appears that support is not fully baked-in yet for that smartphone. It was also indicated that Broadcom uses the 5 GHz channel for cleaner video transmission. I did see a few encoding / decoding artifacts in some cases during the demo. Latency is a bit of an issue with this technology and gaming is not recommended because of the lag. Battery life is a much bigger concern because H.264 encoding is very power hungry. Notebook batteries might be able to bear the brunt with Wi-Di, but we are very interested in analyzing battery consumption profiles when using Wi-Fi display.

Interestingly, the Wii-U uses Broadcom's chips for the wireless communication features and also uses a customized version of Wi-Fi display in the GamePad. Since the encoding and decoding profiles are both controlled by Broadcom in this case, the latency is lesser than what one gets with standard Miracast.

Broadcom ends 2012 as the only company shipping 802.11ac radios in routers being sold to the end users. Marvell and Qualcomm Atheros have also announced 802.11ac radios, but they are not shipping to consumers yet. Broadcom expects PCs, TVs, smartphones, tablets and other devices to join the ac bandwagon next year. Interestingly, Broadcom expects the 'Internet of Things' concept to be carried forward with 802.11ac radios, but we find it difficult to understand why low bandwidth/cost/power requiring applications would go with 802.11ac.

We did ask about where Broadcom stood on the 802.11ah front (something we have been very interested in since starting coverage of home automation technologies). Even though Broadcom is keenly following the developments in that area, they don't seem to be very enthusiastic about the current prospects citing spectrum issues in the sub-1 GHz range. We also asked about where powerline networking stood in Broadcom's plans (considering that they had acquired Gigle Networks, a PLC silicon manufacturer, back in December 2010). They indicated that the shipment of PLC products had come down in favour of Wi-Fi even in traditionally strong PLC markets such as the EU. This may be a biased point of view since we were talking to the wireless group, but the fact definitely presents interesting points to ponder as G.hn slowly picks up speed to compete with HomePlug.

The main announcement at the event was the NFC quad combo chip BCM 43341. Broadom has enjoyed huge success with the Wi-Fi / BT / FM BCM 4334 combo chip and they have now added the IP from the 20793 NFC chip to the mix. This brings down complications in the board design for the OEMs. It also makes it easier for companies which have been hesitant to include a dedicated NFC chip in their phone to join the NFC club. 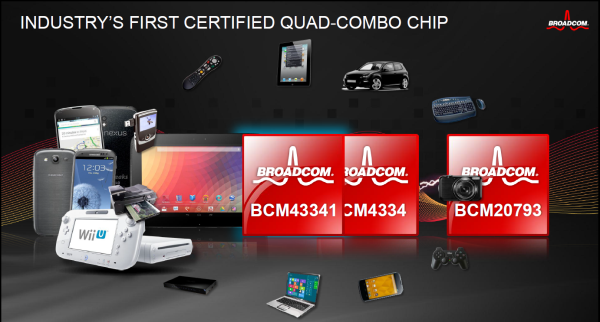 Manufactured in the 40 nm process, the BCM 43341 supports both 2.4 and 5 GHz WLAN with HT40. Android has been instrumental in driving up NFC adoption and Broadcom's standard NFC software stack is now part of the AOSP 4.2 release. We are looking forward to a combo chip with 802.11ac support.

Personally, I have always regarded NFC as a solution in search of a problem, but Broadcom demonstrated interesting tap-to-share applications (such as playing a video on a smartphone and tapping a tablet to transfer the video playback). I am still not fully convinced, but NFC does seem to have some interesting use cases, provided apps put in support. The integration of the NFC software stack into AOSP should provide app developers with the necessary impetus.

Broadcom also presented some of their achievements in the connected automotive space (particularly, the rapid strides made by OPEN for use of Ethernet for in-vehicle automotive communication). They also talked about some chips for use in enterprise routers where the BYOD (Bring Your Own Device) phenomenon has brought about some challenges in terms of security and feature set. These two topics are not in the main coverage area for us yet, so we have not discussed them in detail.

In conclusion, Broadcom has exciting things in store for 2013. We are looking forward to BCM 43341 based products, increased NFC adoption and more number of devices supporting 802.11ac in the future.