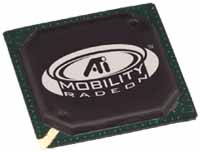 It may be a bold statement, but the truth of the matter is that the world of the notebook computer is evolving at a rate faster than that of the desktop computer. Although rapid evolution is clearly present on the desktop market, it is occurring to an even greater extent in the mobile platform. Functions previously reserved to desktops are quickly making their way into the realm of notebooks.

It was not long ago that everything but the most basic word processor functions were tied to the desk, along with a power outlet and a monitor. As a result of the technological advancements in the mobile industry, mobile computing has infiltrated a whole new market, freeing the computer from the confines of a cubicle. Although technology has steadily been changing the way we look at mobile computing, some barriers have historically held the notebook back from certain markets. For instance, no one in their right mind would consider replacing a $10,000 video editing computer with a $2000 to $3000 laptop.

Another arena where notebook computers have typically been dominated is that of 3D gaming. Any serious gamer who even considered switching from a high end desktop to a laptop of any sorts was thought of as crazy. Not only have notebook computers typically lacked the processor power, hard drive space, and memory requirements necessary for the most advanced games out there, the video card processor usually integrated on a notebook's motherboard has been far to slow to play recent games in a decent resolution. However, as processor speeds, storage space, and memory in laptop computers have slowly been catching up to those in desktop computers, the video solutions found in most notebook computers remain sub par compared to their full sized counterparts.

Lucky for us, those who crave fast 3D performance in any computer they plan on using, desktop trends in video card technology are finally trickling their way down to the laptop computer. Last month we heard a plan from 3D powerhouse NVIDIA on how they plan to bring full resolution 3D to the notebook market. Today we look at a product announcement from a company that is not new to the mobile market but aims to raise it to new levels: ATI. Their new product? The Mobility Radeon, a chip that promises to not only alter the face of 3D mobile computing but the face of ultra light computing as well, hitting the GeForce2 Go head on.