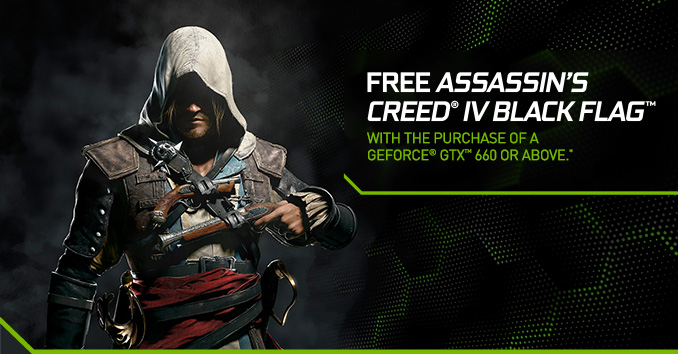 With NVIDIA’s previous holiday 2013 GeForce bundle having expired with the end of the year, NVIDIA has announced that they will be running a winter 2014 bundle to replace it.

Meanwhile the SHIELD discount is similar to the discount that was in NVIDIA’s holiday bundle, with NVIDIA offering a $50 discount on SHIELD when purchased with a qualifying GeForce card. After a series of temporary price cuts, SHIELD itself has now had its price permanently reduced to $249, which brings the final price down to $199 when purchased as part of NVIDIA’s latest promotion.

Finally, it’s worth noting that NVIDIA has discontinued their free-to-play bundle for the GTX 650 series, opting not to replace it. This leaves the GTX 660 and above as the only cards receiving a promotional bundle from NVIDIA at this time. This latest bundle should keep NVIDIA fairly even with AMD is the $150-$250 space, where AMD has their own Never Settle Forever Silver/Thief promotion going. Meanwhile above $250 this bundle further strengthens NVIDIA’s hand at this time, given the significant price advantage NVIDIA holds against the Radeon 280X and above due to Cryptocoin Mania.