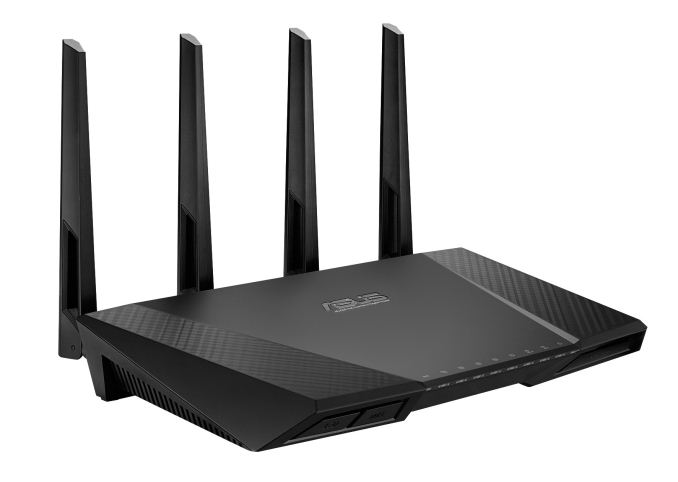 Back at CES earlier this year, I had visited Quantenna and covered the announcement of their QSR1000 4x4 802.11ac MIMO chipset. It was announced that the Asus RT-AC87U would be the first QSR1000 enabled router to hit retail. Despite the announcement at CES, no availability date or price was announced.

Things are getting together now, and Asus and Quantenna have announced that the RT-AC87U is all set to ship (Best Buy actually has it for purchase right now). The router will retail for $270, an admittedly steep price, but one that should be seen in context with the Broadcom-XStream enabled Netgear R8000 that is shipping for $300. The router also seems to be a bit lacking in the I/O front, with only one USB 2.0 port apparently. [ Update: Some readers have mentioned that a USB 3.0 port is hidden beneath a flap in the front. ] That said, it is like that most of the power users who are going to purchase this already have a dedicated NAS device (and don't need USB 3.0 or eSATA ports in their routers).

The RT-AC87U is a bit more future-proof with respect to Wi-Fi standards, thanks to it being the first shipping 802.11ac Wave 2 router. As part of the Wave 2 features, we get four spatial streams and support for MU-MIMO (we do need clients supporting it to get the full benefits). One of the most obvious benefits of going to Wave 2 is the 160 MHz-wide channel support, but, that is not part of the Quantenna QSR1000 chipset that is being used in the Asus RT-AC87U.

Obviously, technology moves at a rapid pace, and one can always wait for the next big thing. There is also talk online of Netgear releasing a Wave 2 router (Nighthawk X4) soon (the FCC details are already out), but official details are scarce. In effect, if readers are interested in hopping on to the Wave 2 bandwagon, the Asus RT-AC87U will be the first opportunity.