X99 and Haswell-E, due to the price, the performance and the feature set, ends up being very expensive compared to the mainstream. It is an odd state of affairs in the self-build arena when a reviewer states that the budget end of a spectrum is sub-$300. In this space we find the ASUS X99-A at $275 MSRP. This motherboard is the topic of our review today.

When considering the motherboard market as a whole, in all except in the server market, the $300 level usually represents the premium level marker. There are very few motherboards on the Z97 chipset that pass this barrier for example, and those that do are usually the cream of the crop. As a result, with Z97 the $250-$300+ range really aims for the higher mainstream performance and functionality. In X99, the $250-$300 level is the base. One of the reasons for this is that due to the prosumer nature of the market, where every motherboard has a lot of features which do not come cheap. There's very little demand for a stripped system outside of the OEM market.

So as a result, the budget end of the market for X99 is still feature packed, even with the X99-A. For comparison we reviewed the $400 ASUS X99-Deluxe when the chipset first launched, and it came with almost everything apart from the kitchen sink. The Deluxe was ASUS' main product for the X99 launch focus, and the X99-A arrived a few weeks later. At $275 it represents a cut down version of the Deluxe.

One new feature that crosses over from the Deluxe is the EZ XMP switch on the board, allowing users to apply their high speed memory profile without even touching the BIOS. My last trip to a LAN event resulted in anecdotal findings of high speed memory kits being used at JEDEC speeds, so something as simple as this should help let users get the most out of their memory.

For gaming or PCIe coprocessor use, this board is aimed at tri-GPU setups with a full PCIe 3.0 x16/x16/x8 layout. One potential benefit of this rather over focusing on full-bandwidth four-way arrangements is that the three-way version saves some build cost by avoiding the additional timing circuits needed for full bandwidth when using four cards. There is an additional PCIe 2.0 x4 slot from the PCH in the middle of the main PCIe slots for Thunderbolt or additional cards. This is situated as to not interfere with dual slot PCIe configurations. 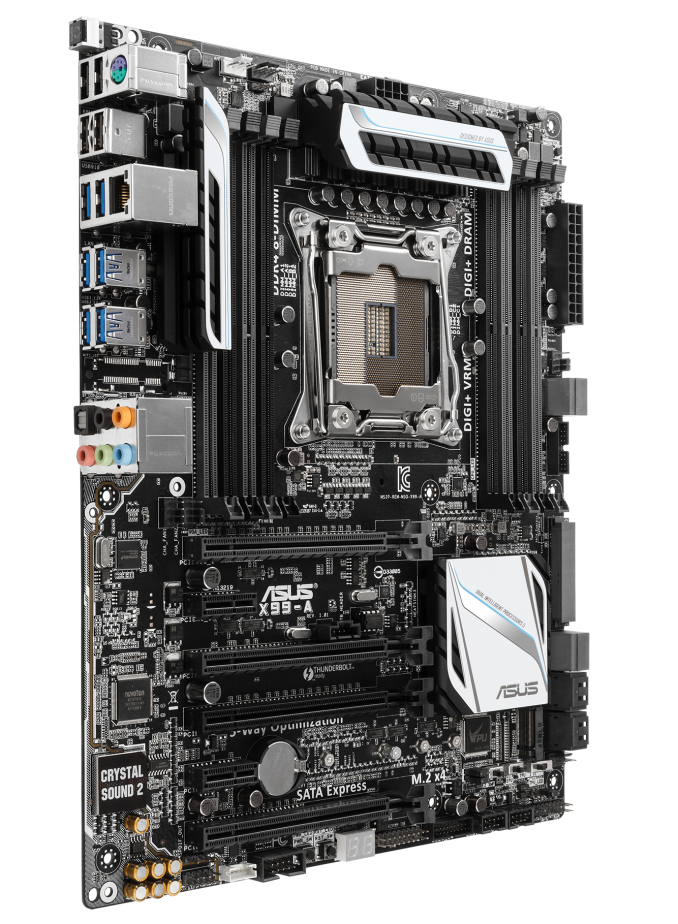 As with most X99 boards there is full access to the 10 SATA ports from the PCH - six of which are RAID capable and the other four which are not as they are from the secondary AHCI controller. For good measure there is also a SATA Express port and a M.2 x4 Gen 3.0 port, with the SATA Express getting RST privileges. The SATA Express shares bandwidth with the PCIe 2.0 x4 slot whereas the M.2 is switched with the final PCIe slot. There are 10 USB 3.0 ports total which come as five from the PCH (two headers and a rear IO port), three from an ASMedia hub (rear panel) and two from an ASMedia controller (also rear panel). An interesting deviation in design is that the ASMedia ASM1074 hub used on the board is a 1-to-4 hub but only three ports are used. This is most likely due to the rear panel design, where a set of three USB ports doesn't really exist.

In terms of performance the system does not implement Multicore Turbo, meaning that stock performance is down compared to some other products but a simple click on the TPU switch avoids this with a small 3.9 GHz overclock. ASUS' strengths on X99 remain the audio performance, with the POST times and power consumption being ballpark for the chipset. ASUS also bundles in their BIOS and software combination which both hit the higher notes in terms of the competitors.

At the time I started writing this review the ASUS X99-A was only $240 at Newegg, making it a really nice price, however it has since gone back up to $275. The other X99 motherboard from this price range we have reviewed scored quite highly and the X99-A gives it a run for its money for sure.

Part of the initial appeal of the X99-Deluxe was the style in which it was presented – the white and silver livery gave it a streamlined look, and the protective cover over the rear IO and audio section of the motherboard added to that effect. The X99-A retains some of this styling, although it is limited in effect due to it only being on the three heatsinks. These heatsinks are also not joined to each other, which might reduce the effect of the aesthetic. 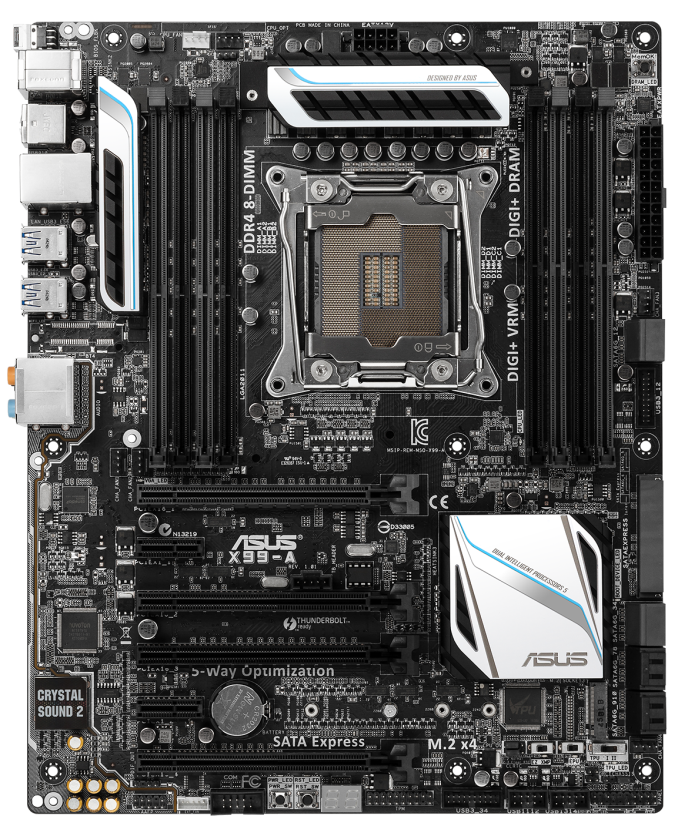 Nevertheless the motherboard itself feels a little busy, with lots of components having the white border around them for the SMT machines for placement. The socket area is fairly busy in that regard, and the CPU has access to five of the fan headers – two 4-pin CPU headers in the top right, two chassis headers to the bottom left of the DRAM slots near the rear panel, and another just below the 24-pin ATX header. The final fan header is below the SATA ports, with a FAN_EXT header for fan extension cards on the bottom of the board near the rear audio port. Each of these fans is 4-pin and can support PWM and DC fans.

Alongside the DRAM on the right hand side is the MemOK button, useful for recovering from failed POST due to memory issues. Beneath this is the 24-pin power connector and a fan header, followed by two of the SATA ports. These are RAID/RST compatible, along with the next four in grey, but the following four in black are not as they are from the secondary AHCI controller on the chipset. The middle two grey SATA ports are part of the SATA Express connector, and between all of these is one of the USB 3.0 headers. 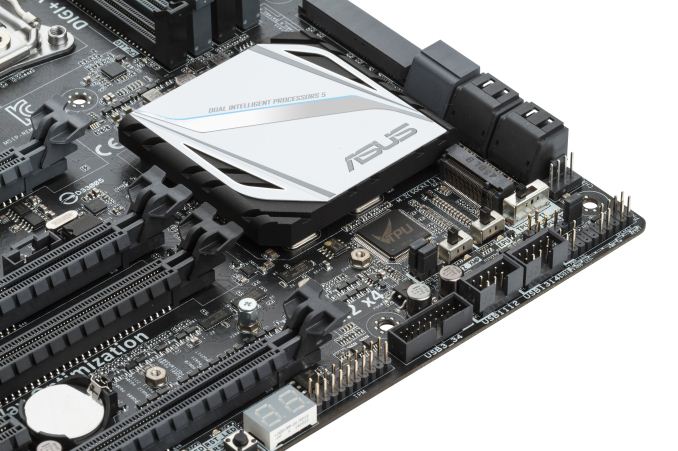 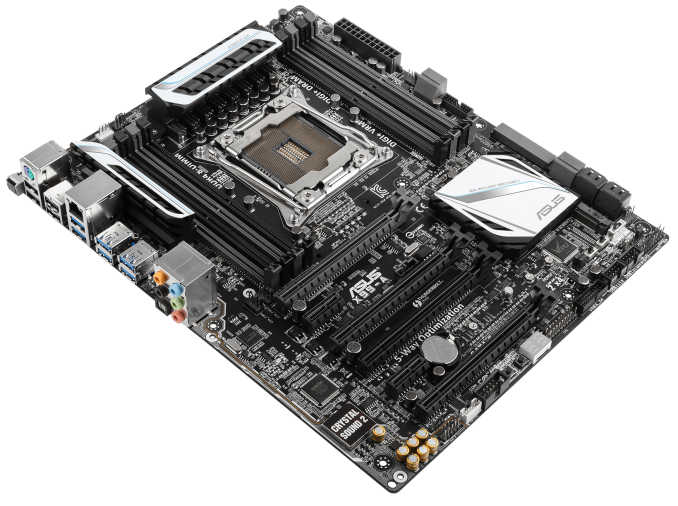