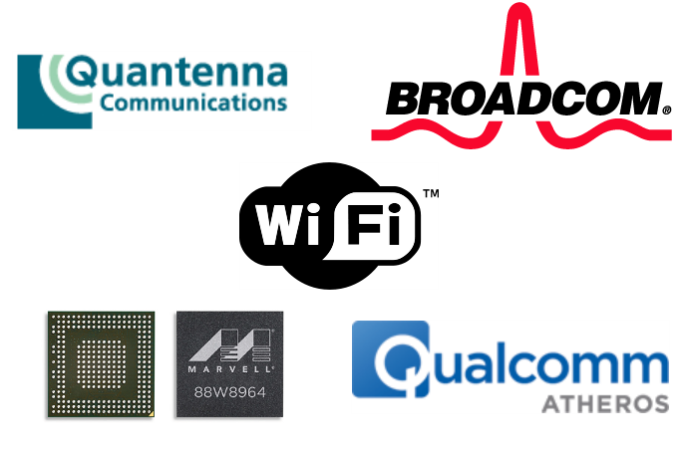 Quantenna was the first to bring a 4x4 MU-MIMO 802.11ac chipset to the market (with the Asus RT-AC87U and the Netgear Nighthawk X4 R7500). It has a number of Wave 2 features, but notably lacked support for 160 MHz channels. Qualcomm Atheros was the second vendor to support MU-MIMO, with the launch of the QCA 9980, 9982, 9990 and 9992 in April 2014. In the meanwhile, Broadcom appeared to miss the Wave 2 bandwagon. Instead, citing lack of MU-MIMO client devices as one particular reason, they opted to push the XStream platform with two discrete 5 GHz radios. This made for some interesting products such as the Netgear Nighthawk X6 R8000. CES 2015 was the ideal time for the silicon vendors to jostle for the pole position, and we weren't disappointed. All the major vendors (and a few of their customers) had interesting announcements at CES 2015.

At CES 2015, we had the opportunity to meet up with Quantenna at their suite and look at the demonstration of their 8x8 160 MHz MU-MIMO 10G Wi-Fi platform announced last year. Unfortunately, photography wasn't permitted, but the demo was very similar to the first generation 802.11ac demonstration by Buffalo Technologies. One of the most important advantages of the new 10G platform is the integration of the 2.4 GHz radios (for 802.11n support) in the same package. This ensures that vendors don't need to hunt elsewhere for the 2.4 GHz support. For example, Asus went with a Broadcom SoC / 2.4 GHz radios while Netgear went with a Qualcomm SoC / 2.4 GHz radios for their QSR1000 solutions. On the WLAN PHY rates side, we have upwards of 6.9 Gbps for the 5 GHz band (since this is a true 8x8 solution). The PHY rates of the 2.4 GHz band along with the proprietary extensions (additional QAM-rates support for both bands that is outside the official specifications) take the peak WLAN PHY rates upwards of 9 Gbps. Quantenna is marketing the system as a 10G solution. It is on track for shipping later this year, but Quantenna wouldn't commit on a more specific time-frame.

The other interesting announcements included a reference design with Lantiq for mid-range 4x4 routers. Using the QSR1000 platform along with a Lantiq GRX300 processor, this enables vendors to have a quick turnaround for their router platforms. The QSR1000 provides 4x4 MU-MIMO 802.11ac (5 GHz) support, while a Lantiq GRX300 SoC provides the 802.11n / 2.4 GHz support. Also on display was the MAUI platform aimed at providing enterprise vendors and service providers a way to optimize the Wi-Fi performance and troubleshoot issues at the customers' end using cloud-based analytics.

Broadcom launched a number of products in their 802.11ac lineup in order to update their portfolio with Wave 2 features. The BCM4366 is the 4x4 MU-MIMO capable radio for high-end systems. For gateways and routers, this can work in tandem with a BCM47094 network processor SoC (which has two Cortex-A9 cores running at 1.4 GHz). It has support for 160 MHz channels (contiguous 80 MHz + 80 MHz, as well as two discontiguous 80 MHz channels). The BCM4366 also includes a NitroQAM feature (QAM-1024). This is outside the 802.11ac specifications (Broadcom-proprietary), and is expected to provide significant performance benefits for clients with Broadcom chipsets. The network processor SoC also integrates USB 3.0 support.

Broadcoms PR doesn't talk about peak WLAN PHY rates, but it looks from D-Link's DIR-895L product page that we don't get the expected 3.4 Gbps+ from a 4x4 MU-MIMO solution capable of connecting to other 4x4 MU-MIMO clients. The cap seems to be at 2.165 Gbps.

Other updates to the lineup include the BCM53573 and the BCM47189 which are 2x2 802.11ac SoCs integrating the CPU, Ethernet switch as well as the radios in a single chip.

Marvell also announced a Wave 2 802.11ac solution in the Avastar 88W8964. The target market is access points, service provider gateways and STBs. Similar to the other solutions described above, we have 160 MHz channel support. The main advantage is the integration of a dual core Cortex-A9 with offloading for many WLAN functions. This frees up the host CPU for other functions.

Despite Qualcomm Atheros announcing their MU-MIMO chipsets early last year, solutions such as the TP-LINK AC2600 got announced only at CES 2015. Shipment is also slated for Spring 2015. The solution doesn't have 160 MHz support either. On the other hand, Broadcom has just announced their 160 MHz Wave 2 solution, but customers such as D-Link are expecting to bring routers based on it to the market in the same time-frame as the QCA 9980 solutions. In any case, all the solutions other than Quantenna's seem to missing one key feature or the other. As a end-user, if one wants to upgrade their Wi-Fi router / access point by the end of the year, a Quantenna 10G-based solution is probably the best bet. That said, solutions such as the D-Link DIR-895L that adopt the XStream platform (two sets of 5 GHz radios) along with the latest MU-MIMO solution from Broadcom are also very attractive for use-cases where channel interference is not much of a concern (rules out dense apartment complexes) and the presence of non-MU-MIMO clients prevent the MU-MIMO solutions from providing full benefit.