At the start of the year, Intel ‘foolishly’ handed me a wafer of its next generation Tiger Lake processors, as the moment it came into my hands I attempted to make a very quick exit. In my time with the wafer, we learned that this new 10nm laptop-focused processor had four cores, used Intel’s next generation Xe graphics architecture, and would set the stage at the end of the year as the cornerstone of Intel’s mobile processor offerings. As part of Intel’s Architecture Day 2020 a couple of days ago, the company went into detail about what makes Tiger Lake the true vehicle for 10nm, and why customers will want a Tiger Lake device. 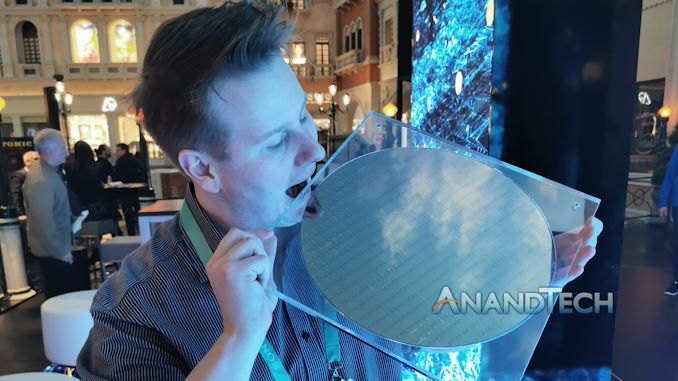 Before we start into the information about Tiger Lake, I want to start by saying that the information in this article, as well as our coverage on Xe graphics and a number of upcoming mini-stories, all stems from Intel’s Architecture Day 2020 event. Building upon the success of the event in 2018, press and enthusiasts alike have continually asked when Intel would be doing it again. No doubt trying to pin down 20+ senior engineers and executives for an event at the same time in the same location is tough, and due to COVID this event was delayed at least twice.

Despite this, Intel made Arch Day 2020 a virtual event, allowing the engineers to pre-record their segments. The event was held behind closed doors, as with the 2018 event, the embargo lift was set for 1-2 days after. As a result, the articles you see published today are at the end of a lack of sleep between the event and now, as Intel went very dense very quickly (that’s a good thing™).  We’ve digested as much as we can in that short space of time, we’ve asked some initial questions, but no doubt more will be asked as further analysis occurs. 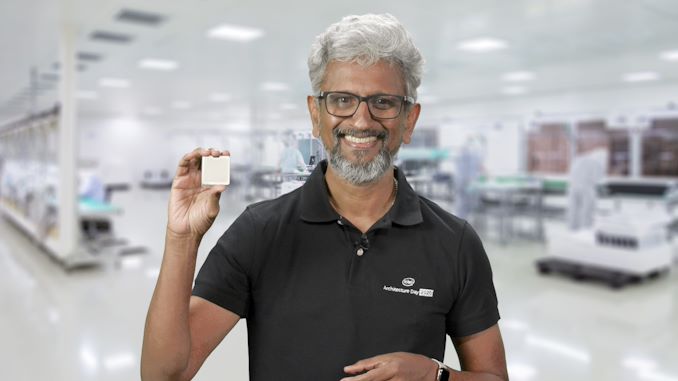 The event was headlined by an effervescent Raja Koduri, who took the role of covering roadmaps and some of the Xe structural details. Prominent Intel Fellows and Engineers were the stars of the show in my eyes, particularly Ruth Brain (transistors), Ramune Nagisetty (packaging), Boyd Phelps (Tiger Lake), David Blythe (Xe GPU), Lisa Pierce (GPU software), Sailesh Kottapalli (Xeon) and others, all covering aspects of Intel’s strategy and portfolio.

Along with this article today covering Tiger Lake, we have an article going into the Xe graphics disclosures today as well. There are a number of mini-highlights from the event I also want to cover, and these will be published over the next few days.

Intel first unveiled its Core microarchitecture in Q1 2006, as an offshoot of the more power efficient Pentium Pro products. This was decided because the leading edge Intel products of the day, based on Netburst, were fast but hot and power hungry. By going down the route of Core, starting with Conroe, Intel has delivered multiple generations of products with the goal at each step to improve performance, power efficiency, and introduce better ways to perform compute.

Intel uses a lot of code names for its cores and for its products. The marketable names that get printed on the side of the retail box are do with ‘9th Generation Core’, however because we are dealing with the finer details of these products and cores, we prefer to use the code names. Keep this cheat sheet if the number of code names starts getting dense.

At its heart, the current Tiger Lake processor being presented by Intel is a four core mobile-series processor aimed at the 15 W target market where premium ultra-portable notebooks exist. Inside is four cores based on Intel’s Willow Cove architecture, the next generation after Sunny Cove, which we saw in Ice Lake. The four cores will be paired with 96 Execution Units of the new Xe-LP graphics architecture, and Tiger Lake will be Intel’s first product with Xe-LP. 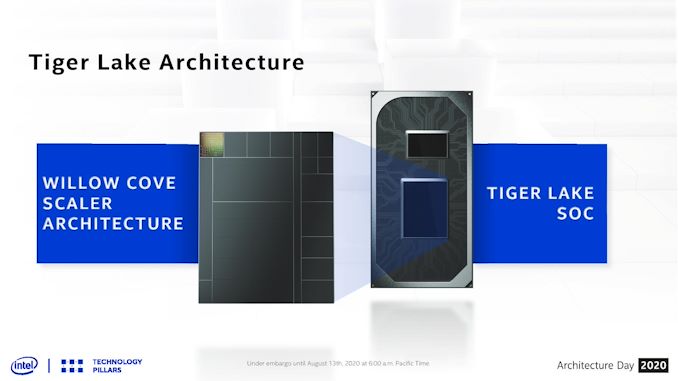 Compared to Intel’s current generation product in this space, its Ice Lake processor, the number of CPU cores stays the same, but we move from a Sunny Cove core design to a Willow Cove core design, which has performance benefits we will detail later. Graphics is boosted in raw numbers by +50%, moving from 64 EUs to 96 EUs, however the architecture change from Ice Lake’s Gen11 design to the new Xe-LP affords additional performance benefits.

Tiger Lake also includes on-silicon support for technologies such as Thunderbolt 4, USB 4, PCIe 4.0, LPDDR5, as well as dedicated IP for total memory encryption and an updated Gaussian Neural Accelerator (to help with noise cancellation and similar functionality). We cover these on our page about Tiger Lake’s IO and sub-system.

Tiger Lake uses Intel’s 10nm ‘SuperFin’ manufacturing process technology. As part of this launch, Intel has replaced the 10+ nomenclature and instead renamed it to 10nm SuperFin, or 10SF. This is in part due to some of the updates Intel has made to its 10nm process in order to enable some of the features in Tiger Lake.

The SuperFin technology includes a new high performance transistor methodology for the critical paths of Intel’s design, and an improved metal stack which uses novel materials in the latest update to Intel’s FinFET process technology. This includes evolutionary changes to achieve the required performance characteristics that perhaps should have been part of Intel’s 10nm process from the beginning. 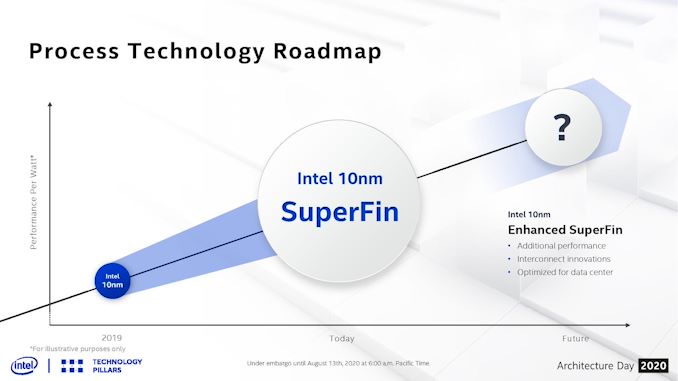 We will also cover the new SuperFin over the course of our Intel Architecture Day coverage.

Intel has also renamed the generation after 10nm SuperFin, and called it 10nm Enhanced SuperFin, or 10ESF for short. This comes into play with some of Intel’s future products, such as its high performance computing GPU called Ponte Vecchio, as well as the next generation Xeon Scalable platform called Sapphire Rapids.

As part of Intel’s disclosures about Tiger Lake and specifically to talk on Willow Cove, Intel’s Boyd Phelps, the Tiger Lake SoC Lead Architect, spoke about how the new design, coupled with the new manufacturing technology, enables the new core to offer better performance and better performance efficiency at every point of the curve compared to Ice Lake. 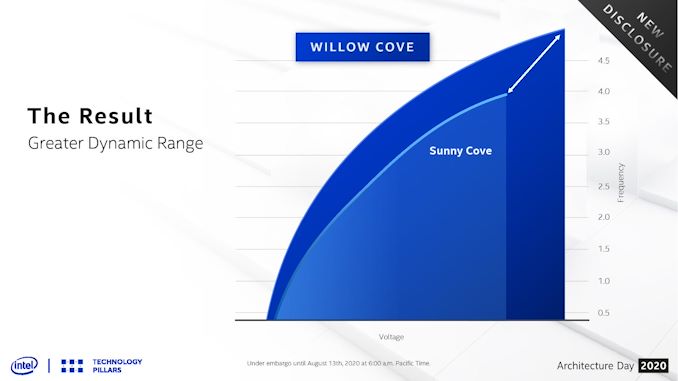 This is important – when we reviewed Ice Lake, it was a bit of an odd situation. At the time, Intel’s main comparison point was its previous generation Whiskey Lake processors. Ice Lake afforded a raw 15-20% performance uplift against Whiskey Lake at the same frequency, which in general is a very good metric to have. However, Ice Lake was 10-20% lower on frequency, effectively nullifying all of those gains. At the same power, Ice Lake had a hard time beating the previous generation.

With Tiger Lake then, the stage seems to be set that the raw performance in frequency alone is going to jump anywhere from 10-20% depending on how the turbo modes are set to work in the final products. Intel puts this improvement in frequency down to its new SuperFin transistor design and updated manufacturing process.

When it comes to clock-for-clock raw performance gains for Tiger Lake, the differences compared to Ice Lake are not as clear cut, primarily because the cores microarchitecture layout between the two only has a few small changes. We’ll cover those a bit later.

What is 10nm SuperFin All About?
Tweet
PRINT THIS ARTICLE
Comments Locked