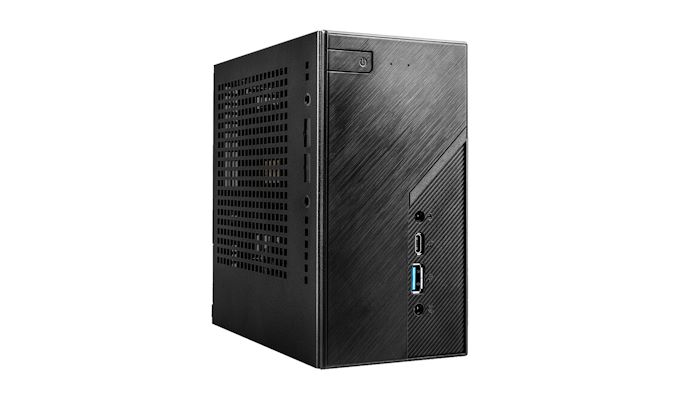 The mini-STX form-factor was introduced by Intel in 2015 to provide additional options in the burgeoning small form-factor (SFF) PC space. Since then, vendors such as ASRock, ECS, and MSI have been releasing new products based on the mSTX form-factor – and not just for Intel platforms, but AMD as well. As a result, while it’s still a small part of an overall much larger market, mSTX has seen increasing traction as the smallest form factor to still be able to accept socketed CPUs.

A good chunk of mSTX’s success, in turn, has been thanks to the efforts of ASRock. The company’s DeskMini series is one of the better known mSTX line-ups in the market. Slotting in between traditional motherboards and barebones ultra-compact form-factor machines, DeskMini mSTX boxes are the next step past UCFF machines in terms of customization: in addition to user-upgradable RAM and permanent storage, the user is free to choose any suitable CPU (subject to TDP limitations) and a cooler compatible with the supplied chassis – making it possible to configure and upgrade the very heart of a mSTX box. Graphics still need to be integrated (or occasionally, added via MXM cards), but with integrated graphics getting better with every generation, mSTX has been increasingly unimpeded by this trade-off.

Today we’re going to be taking a look as the DeskMini H470 - ASRock's offering for Intel's LGA 1200 processors using the H470 chipset. Aspects we’ll be covering include a look at a sample build process, the results from subjecting it to our standard SFF PC evaluation routine, and an analysis of how it stacks up against the other SFF options in the market.

ASRock was one of the pioneers in the SFF PC space with their Core and Vision series of products using customized boards. After Intel's NUC and mini-STX became popular, the company introduced the Beebox (NUC clone) and the DeskMini (mini-STX and micro-STX) series into the market. The DeskMini units are sold as barebone packages, coming with the chassis, motherboard, power supply, optional Wi-Fi module, and assorted cables. Users need to supply a CPU, a CPU cooler, DRAM, and storage.

We reviewed the first DeskMini 110 mini-STX barebones PC back in mid-2016, the DeskMini Z370 micro-STX PC (with a GTX 1060 discrete GPU in a MXM card) in mid-2018, and the DeskMini 310 in early 2019. With the 300 series, ASRock also started introducing AMD-based models, and we looked at the A300 around the same time. Fast forward a year, and ASRock introduced follow-ups to both products - On the Intel side, we got the DeskMini H470, while the DeskMini X300 was put forth as an upgrade option for AMD builds. 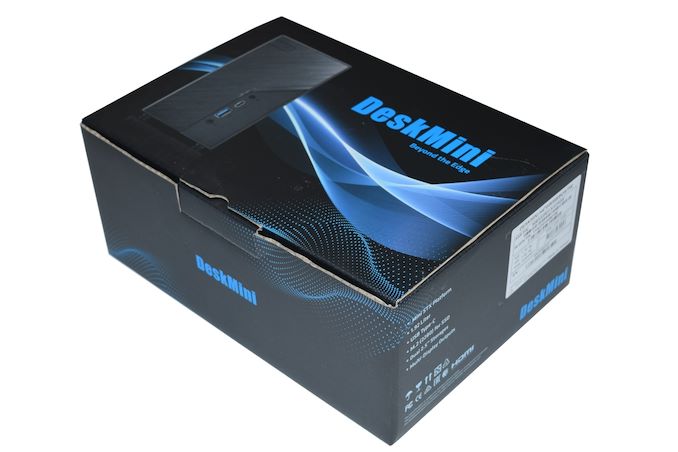 The DeskMini H470 comes with the motherboard pre-installed in the chassis. Users need to supply their own CPU, DDR4 SODIMMs, and M.2 PCIe SSD and/or 2.5" drives. A M.2 Wi-Fi module comes in a separate package for the DeskMini H470W SKU, but we were sampled the Wi-Fi-less DeskMini H470 for review - From online listings, it appears that the bundled Wi-Fi module is the old 1x1 Intel Wireless-AC 3168 with a theoretical maximum throughput of 433 Mbps. The board accepts any CNVi-enabled M.2 Wi-Fi module, and the latest Wi-Fi 6 ones are available for less than $30 if users absolutely need top-notch Wi-Fi in the system. The previous generation DeskMini models came with a dual USB 2.0 port cable for connecting to the motherboard's USB 2.0 header - This cable is not included in the DeskMini H470 package, though the motherboard header is still present. The accessories included in the package are two SATA (data+power) cables, a M.2 SSD mounting screw, screws for attaching 2.5" drives to the internal frame on which the motherboard rests, and rubber feet for the chassis (indentations are embedded for both vertical and horizontal placement of the system). In the North American market, a 120W (19V @ 6.32A) power adapter and a US power cord are also bundled. 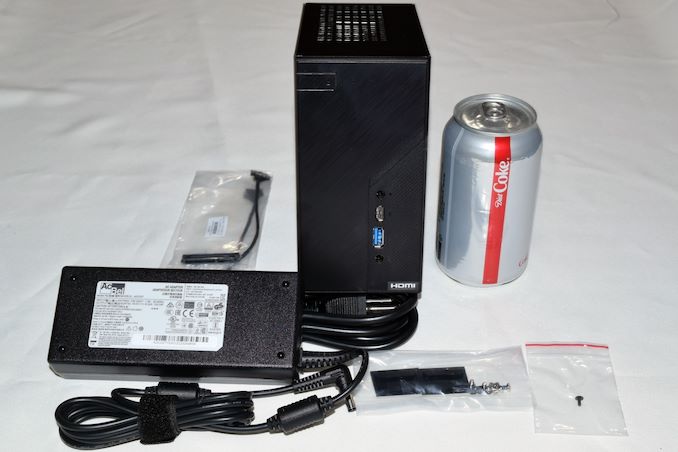 The following components were chosen for the evaluation build: 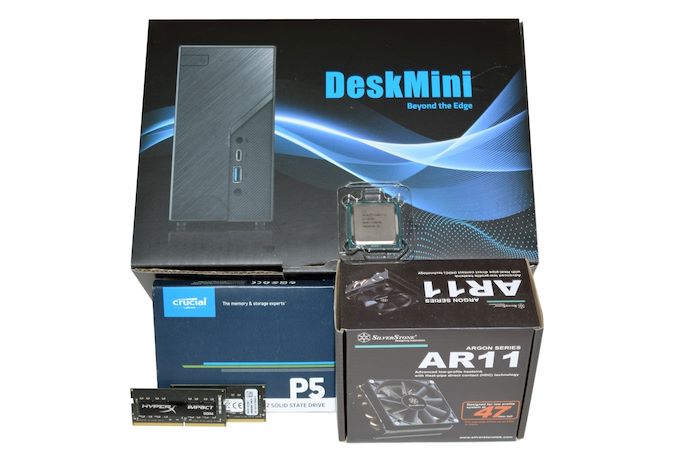 The galleries in the remainder of this section provide a chronological view of the build process. The installation starts with the removal of four screws on the rear panel and pulling out of the motherboard tray. The ribbon cable connecting the power button and activity LEDs to the motherboard is then removed from the front panel header to allow unfettered access. On the top of the board, we have the CPU socket, two DDR4 SO-DIMM slots, and M.2 slots for a 2230 Wi-Fi module and a 2280 SSD module. The board itself is mounted on a metal frame with four screws. On the underside of this metal frame, we can see mounting holes for two 2.5" drives, as well as an elliptical opening to connect these drives to the board's SATA ports.

Gallery: Getting Started with the DeskMini H470 Build 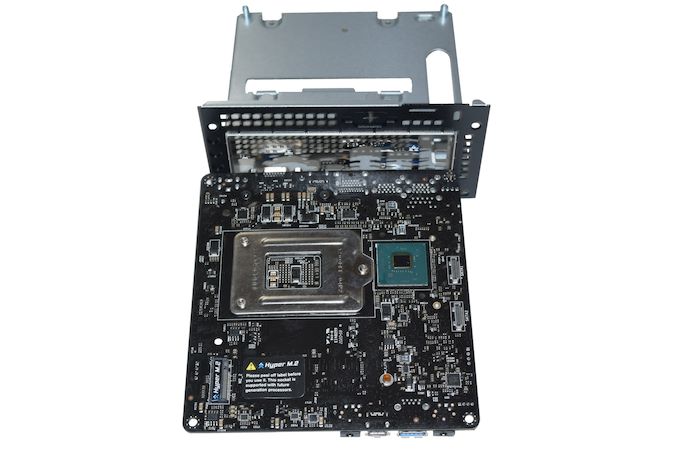 While it is possible to install the CPU, DRAM, M.2 cards, and disk drives without dismounting the board, the installation of the thermal solution makes it necessary to access the underside. This is achieved by taking out the screws mounted in the four corners of the frame. The interesting segments of the board hidden under it include the PCH package, the Realtek ALC233 audio codec chip, and a M.2 2280 slot with a 'Hyper M.2' tag. This slot has an accompanying note indicating support for the socket with future generation processors - an obvious nod to the PCIe 4.0 x4 lanes directly off the Rocket Lake-S CPUs for storage purposes.

The DeskMini chassis has a CPU cooler height limitation of 52mm. Since our CPU sample was from a tray, we did not have a box fan to go along with it. In considering third-party coolers, the height along with any possible obstructions to the other board components need to be kept in mind. The SilverStone SST-AR11 satisfies both these aspects - at 47mm, it has a low profile. The fan is also wide at 92mm to minimize noise while promoting more airflow. Silverstone promotes this cooling kit as an example of 'heat-pipe direct contact' technology - wherein the heat pipes interface directly with the thermal compound on the processor. We also observe that the heat-pipes have sharp bends at the edges to avoid going beyond the edges of the heat fins themselves. This ensures that there is no scope for these pipes to interfere with the SODIMMs or other board components.

The Silverstone SST-AR11 comes with a thermal compound pouch, and that was spread liberally over the processor. The heat-sink assembly was then positioned above the processor to align with the mounting holes. The board was turned over to fasten it to the board using screws supplied in the SST-AR11 package. The installation process as well as post-installation pictures are presented in the above gallery.

The installation of the remaining components was fairly straightforward. The Crucial P5 is a M.2 2280 PCIe 3.0 x4 NVMe SSD featuring Micron 96L 3D NAND along with a Micron DM01B2 in-house SSD controller. The Kingston SODIMM kit is a low-profile one with no fancy heat-sinks or RGB - perfect for a budget build in a compact machine. The absence of tag-ons in the kit ensures that the SODIMMs don't extend beyond the DIMM-holders. As the gallery below shows, the heat-sink is sized with just enough clearance to avoid making contact with the holders installed at either end of the SO-DIMM slot closer to the CPU socket.

The specifications of our ASRock DeskMini H470 review configuration are summarized in the table below.

In the next section, we take a look at the various BIOS options provided by ASRock for the DeskMini H470, along with an analysis of the platform's I/O capabilities.